So, I have been very slack with posting blogs recently …. this is due, in part, to the fact that I have found a sake partner in crime…. an accomplice who is as obsessed with Japanese culture, language, travel, movies, books, food, cooking and Nihonshu (sake) as I am. We are currently exploring the delectable delights of sake and sipping our way through every available option (within reason… I must say, for beginners, we are quickly becoming sake snobs). We are attending a Sake Masterclass in Melbourne next week. It is very exciting. In a few short months we have learned the difference between 純米大吟醸酒(junmai daiginjo- super premium sake) 濁り酒(nigorizake- cloudy sake) 生酒(namazake- unpasteurised sake)…. there is much to learn though.

Sake is brewed from rice. The only ingredients are rice, water, yeast starter (moto) and koji mould (the culture). It is brewed, rather than fermented, so is more like beer than wine, and sake brewing produces the highest alcohol content of any non-distilled alcohol. (This is 20%, which is watered down for palatability). Sake has been made in it’s current form and using the same brewing process for around 1000 years, although has been brewed in some form for more like 1700 years. Premium sake, ginjo, has only been around for maybe 40 years. We picked a good time in history to become interested in sake ☺ 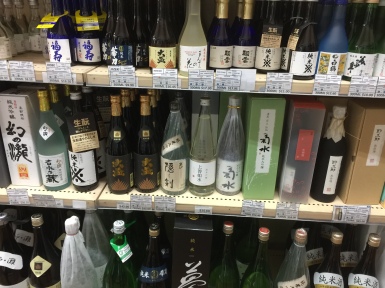