We started our day today with traditional Japanese breakfast, which is nori, rice, miso and fish (cooked and warm) and green tea. Delicious and very filling. It kept me full until 2pm. It was a beautiful day, so despite my intention to leave early, I decided to do some washing. Mya was harassing me about playing with Chelsea, so we hung around for an hour or so. They played badminton. It’s so nice to watch them playing, giggling, chasing, without much talking….. Well, they both talk, A LOT, but neither can understand the other much.

We then headed out to the Kyoto International Manga Museum, which is housed in an old elementary school. The building was beautiful, from 1926, and the staircases and woodwork were lovely. The museum itself houses hundreds of thousands of manga (comics), mostly Japanese, but quite a lot in English. Historical manga, political manga, educational manga and then just stuff like TinTin, Astro and the other thousands and thousands of works. The museum was great. The manga can all be taken to anywhere in the building, the sunny lawn, the quite rooms, and read…. For as long as you like, as many as you like, for about $3, if you’re a student. We all enjoyed this place. We then headed into Kyoto downtown and had a look around. It’s a beautiful place. A city surrounded by mountains.

Back home to meet the girls, a few rounds of Super Smash Bros and Mya and I joined Maki (the owner of our guesthouse and the girl’s mum) Lancey and Chelsea into town for parfait. Tsujiri Honten is a matcha tea house, that now also makes ice cream and parfait. Established in 1860 in Kyoto, the tea was amazing, and the parfait was sensational. Mine had matcha whipped cream, matcha ice cream, matcha agar jelly, mochi (glutinous rice dumpling), banana and kiwi fruit. Wow…Mya had similar only no fruit and shaved green tea ice and red beans. After gorging ourselves, Maki took us for a walk through Gion. One of the original hanamashi (geisha districts). There are still many ochaya (tea houses) and we saw one limousine with three maiko (apprentice geisha) being driven to an appointment. Strictly geisha are from Tokyo and in Kyoto they are geiko. The tea houses have a registration board at the front. They all looked very old. I would not have had this experience without Maki. She was wonderful, telling me so much about Kyoto, and Japan.

After our walk we came back and played cards. The girls told Mya she should call them Lan-chan and Sen-chan, because that is what their friends call them. They decided to call her Mya-san. She is very pleased with this name!!

I am already nervous about leaving Kyoto. I know Mya will be so upset. 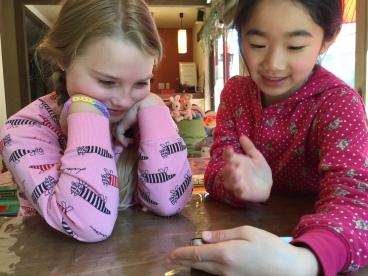 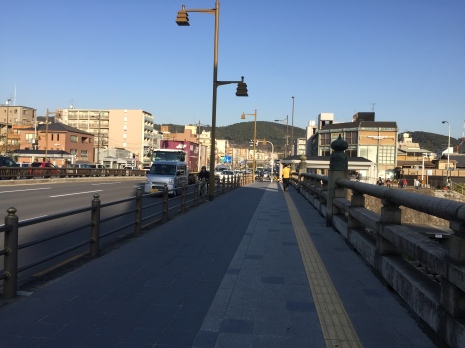 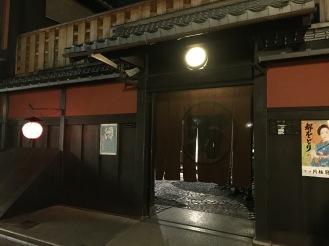 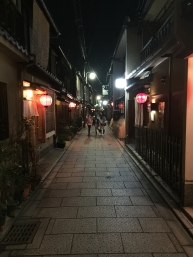