What an amazing day we had for Christmas. Out of bed early and a bus and three trains to arrive at Universal Studios Japan, in Osaka, by 9:30am. We were totally overwhelmed when we arrived. USJ is huge, about 10 times the size of Movie World, and far more interesting. The park is divided up into several areas. Hollywood, New York, San Fransisco, Jurassic Park, Amity Village (Jaws), Water World and, of course, Wizarding World of Harry Potter. We walked around for a bit, looking at the biggest Christmas tree I have ever seen (Guinness Book of Records holder of largest artificial tree and most lights in the world) and then decided to try the Spider-Man ride, totally unsure of what we were getting ourselves into. I’m not a big fan of rides, or didn’t think I was. I liked them when I was younger, and then just kind of stopped going on them. Finn has never been interested, and Mya hasn’t been to a theme park since she was little.

Oh my goodness. This ride was sooooo much fun. You go in a kind of car thing, that seats eight people and get blasted through New York, chasing villains and crashing through billboards, and splashing through rivers. This was all in 4D, 3D glasses, plus we were upside down, spinning, getting wet and feeling heat blasting from the explosions. Intense!!! Finn nearly changed his mind, but I talked him into it. He was glad I did.

Next was San Fransisco. Minions everywhere and Back to the Future ride. We had to help Doc Brown get the Delorean back from Biff. Sitting in a Delorean we were catapulted into hyper drive and flying, uncontrollably, through the air. This ride was also full on, and so fun. I screamed and laughed my way through it. The girls looked a little apprehensive, and very scared during the ride, but elated and so excited afterwards. Finn was literally shaking with excitement as he got off each experience.

We stopped for a quick bite of lunch, a picnic, and Maki went to get popcorn. This ended up being the longest wait we had all day. Usually Universal is packed in Japan, and waiting times can stretch out to 3 and 4 hours, per ride. Sometimes longer. We had purchased the Express Pass, and we didn’t really wait for anything. Super quick and easy.

By this time it was 11am. Coffee time, and double scoop ice cream cones for the kids? Why not. It was Christmas Day, after all.

Next was Terminator 2. This was more a movie type experience, 3D and with moving and shaking sets and wind and stuff. The 3D was incredible. The girls were trying to grab the bits of metal that looked like they were floating in front of us. Keep in mind, all of this was happening in Japanese. It didn’t really matter that much of it was beyond us. We knew the stories, well Finn and I did, and Mya really didn’t care.

The next ride was Jurassic Park. This was hilarious. I have a photo of me screaming and laughing to prove it. Maki had been on this one and told us you get wet. This counted Finn out, but, it was the only one he didn’t do all day. A boat ride through Jurassic Park, what could go wrong? Well, the velociraptors that tried to attack the boat were pretty scary, but the massive tyrannosaurus that tried to eat us as we were flying down a water logged roller coaster, with water splashing everywhere, was terrifying. The girls were funny, a bit scared, but laughing, as well. Maki and I couldn’t stop laughing.

After getting wet, we headed to Water World. Although this movie was terrible, the stunt show, with jet skis, boats, light planes and fire and water, was really fun. Very entertaining. By this stage, with the time we could enter Hogsmeade fast approaching, excitement levels were pretty high. The kids were quite excited too.

As we walked through a forest of pine trees, we came across a broken down Ford Anglia….. Then we rounded a bend in the path to find ourselves in Hogsmeade. Wow. I was totally speechless. It was beautiful. Really, really magical. Zonko’s and Honeydukes on the left, Owl Post and Dervish and Banges on the right. Ollivander’s slightly up the road, just beyond the Three Broomsticks and The Hogshead. And………..as you round the corner of the cobblestone street, up on the hill, Hogwarts School of Witchcraft and Wizardry…… Hooray!!!

We went on the ride first, Harry Potter and the Forbidden Journey. Awesome. You walk into the castle, pop everything into a locker and then walk up the stairs. The stairway is just like in the movie, paintings everywhere, that are moving and talking to each other. Along the corridor past Dumbledore’s Office and then past the Fat Lady and into the Gryffindor Common Room. Following the route along, you come to the ride itself. 3D glasses on and hanging in a chair like contraption, with your legs hanging. Before you know it, Hermoine is blowing floo powder on you and your speeding through the floo network, to come out flying above Hogwarts. Then Harry speeds past you on his broom and you’re after the golden snitch. Lots of flying and falling and hanging upside down, Aragog and giant spiders, dementors, it was all a bit of a 9 minute long, extreme, screaming, laughing blur. It was absolutely my highlight of the day. I’m pretty sure it was everyone’s……

After emerging through Filch’s Emporium of Confiscated Goods we spent a lot of time exploring the shops. We saw a wand “fitting” at Ollivander’s, and Finn and Mya both have personalised wands. Lancy already had Hermoine’s, so this time she got Dumbledore’s. We visited the toilets, where Moaning Myrtle caused Finn to have a bit of a mishap, and entertained the rest of us  (Myrtle, not Finn).

We then went to The Three Broomsticks for dinner (Christmas dinner)….. Roast chicken, potatoes, broccoli, capsicum and BUTTER BEER!!!! Butter beer is the best drink on the planet. Even better than Tanqueray and Tonic

After dinner, Honeydukes, for giant chocolate frogs and Bertie Bott’s Every Flavour Beans, lots of browsing (Hogwarts robes were nearly ¥15000, about $160), ?……..more night time photos of the castle, and a performance by the boys from Durmstrang and the ladies from Beauxbatons. A warm butter beer on the way out and we sadly left Hogsmeade.

It was getting late and after getting Chelsea her unicorn, we looked at the Christmas performance for a bit, but decided we were all too tired, and decided to go home. Three trains and a bus later, we got home around 9:45. The girls were still buzzing. So excited. And then, the Every Flavour Bean challenge began. I have to say, I watched them, thinking, they can’t be that bad….. So I tried one. Vomit. Oh dear, it really tasted like vomit, or rather, the after taste of vomit. There was also ear wax, worms, boogers, black pepper, soap……yuck. I didn’t try anymore bad ones. The girls were closing their eyes and picking one…..then, with much laughing and screaming and cajoling, eating them. The bad ones were chewed a couple of times and then unceremoniously spat in the bin. Hilarious…….

What an amazing day. So much fun, so much laughter. Surrounded by more Santas than I have ever seen in one place, all with black hair! 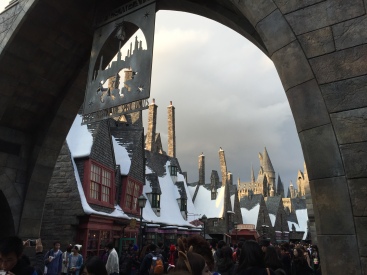 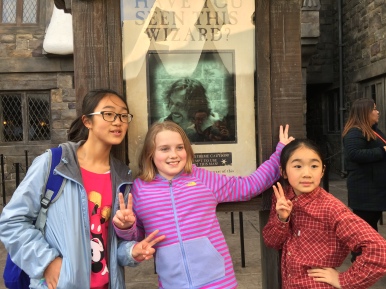 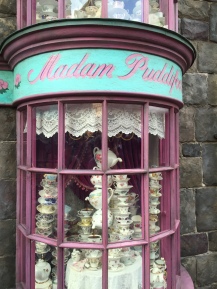 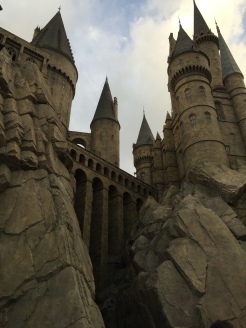 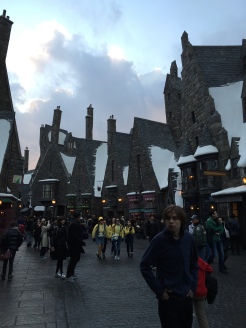 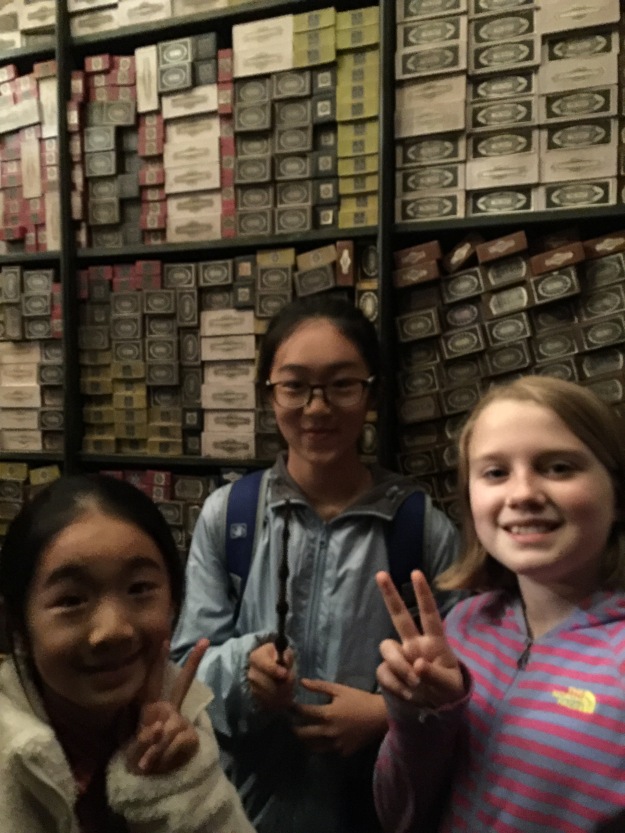 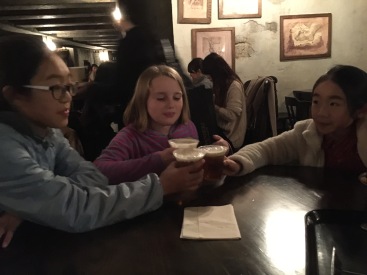 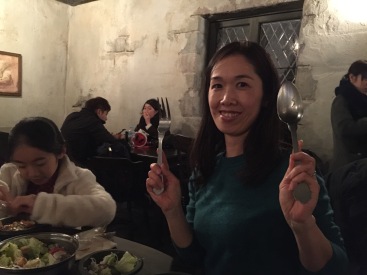 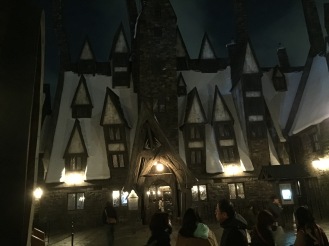 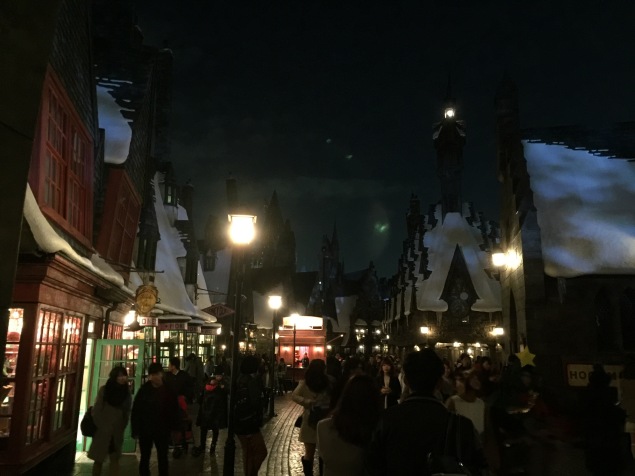 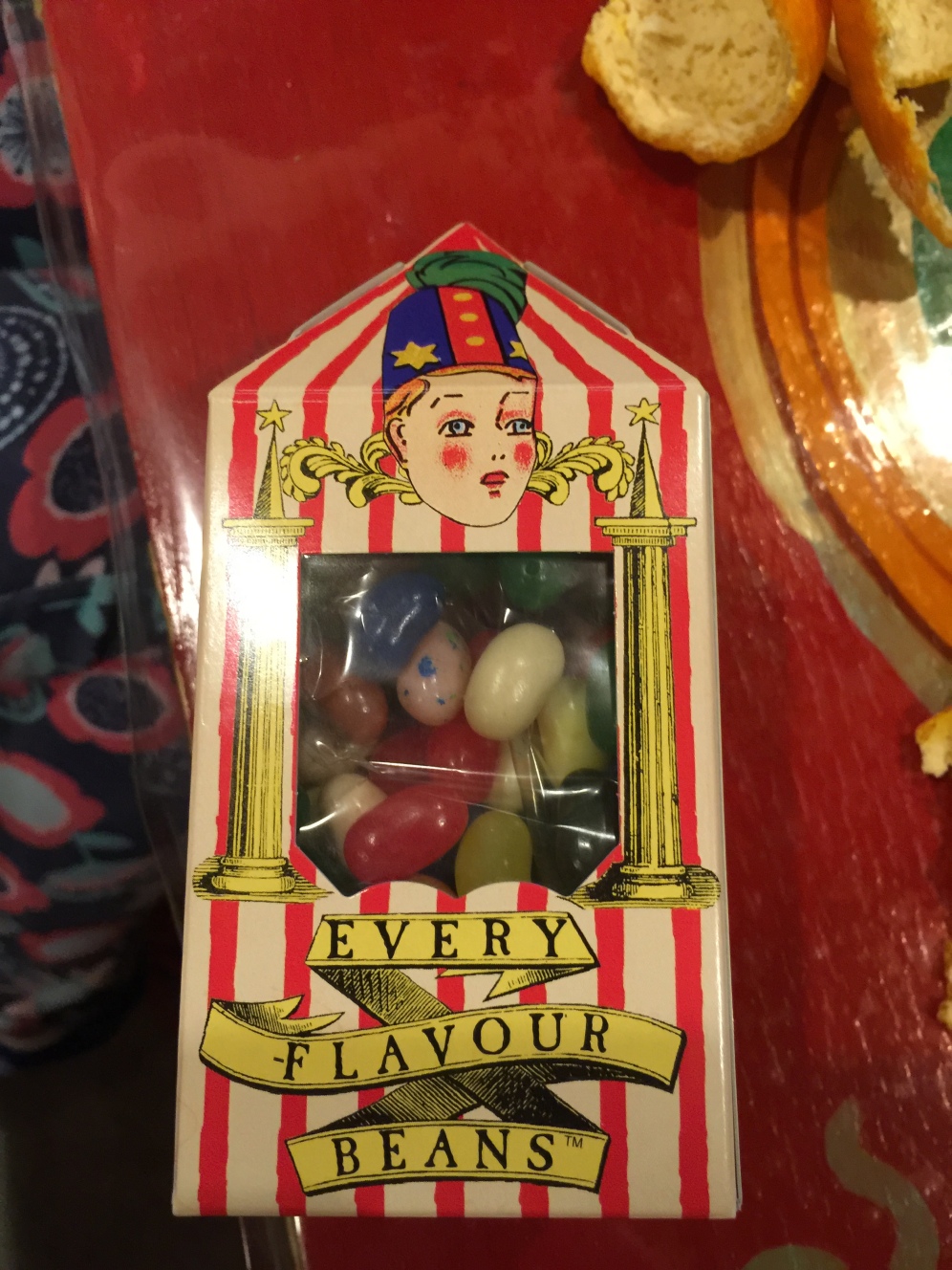