New Year’s Eve started with Finn and I deciding that we would make the pilgrimage of his desire to see the great Mecca, NINTENDO. The Nintendo headquarters are in Kyoto, and although they are closed to the public, Finn wanted to see where the magic takes place. Mya, had once again ditched us, this time for cycling, jumping over massive turtle shaped stones on the river and her friends.

We caught the bus as far as it would take us, and then walked for around 20 minutes to find this virtual  walled city. Enormous, white, modern and fashioned somewhat after a Mario question box, this building is quite impressive. All the street lights have both solar panels and wind turbines on them. The gates are chrome and shiny, and it was deserted, as it was a public holiday. Apparently you are not allowed to photograph the buildings. As there was no one there to inform us of this, I took lots of photos.

We then walked to the closest train station. The train system in Kyoto is good, but the bus system is better, so this was our one and only local train in Kyoto. We got off at Kyoto and returned to Yodobashi Camera. Mya needed an iPad case, pronto, before the iPad befell a terrible fate.

Mission accomplished, we decided to go back to the great tempura place upstairs….. Both had rice, I had miso, Finn had prawns, fish and chicken, I had prawns, renkon (lotus root) and pumpkin. We had tea. It cost ¥1450, about $16 or $17…… If I lived in Japan I would give up cooking!!

After this we went back to Teramachi…..to sneakily get the Tabi boots. Ninja we were not….. With everything closing around us, we couldn’t find the shop. With less than five minutes to spare, we found it……. Yay. We jumped on a bus and headed home, only to find Mya had ditched us for dinner,as well…. As New Years is a big date night, we struggled to find somewhere to eat. We settled for a funky little bar up the road called Santiago. I had wanted to try this place when we were last in Kyoto, but never made it here. Great music, a Moscow Mule, an armchair and Monkeybutt…… A great way to spend our last dinner of the year.

We walked back to the guesthouse, I finished some washing and stuff, and then Maki invited us to eat soba noodles. Eating soba noodles on New Years is a tradition that symbolises long life (long noodle) and the easy passing of obstacles (the ease with which they are broken).

After noodles we rugged up and, with another two couples from the guesthouse, Maki, Sim, Lancy and Chelsea, we headed to Hoko-Ji, a temple close by, with a very large bell. There was already a queue of people, by now it was 11.15, and we joined the queue. Finn looked at me and asked if we were really going to line up for an hour to ring a bell? He decided to walk home. The girls took me down to a nearby park because, in Chelsea’s words, it’s very scary…… There is a very large hill next to the park, which is said to house the ears and noses of all the enemies of a famous local samurai. Very scary indeed.

We went back and joined the queue, at 11:45 the monks began chanting and playing their singing bowls…… The oldest monk then, very loudly, with a massive wooden pole on a very thick rope, struck the bell. The reverberation was magnificent. And so the queue of people began to ring the bell. Each group, one ring, which required a few swings of run up. Some rings were loud and deep, others, short and higher pitched. This continues on every bell, in every shrine in Kyoto. You can hear it all around, until every bell has rung 108 times. (Buddhists believe we have 108 different sins).

We rang the bell at around 12:30. It was a lovely way to welcome the New Year.

The girls skipped and laughed and played all the way home. Where do they get the energy?

We fell into bed, exhausted, as usual. 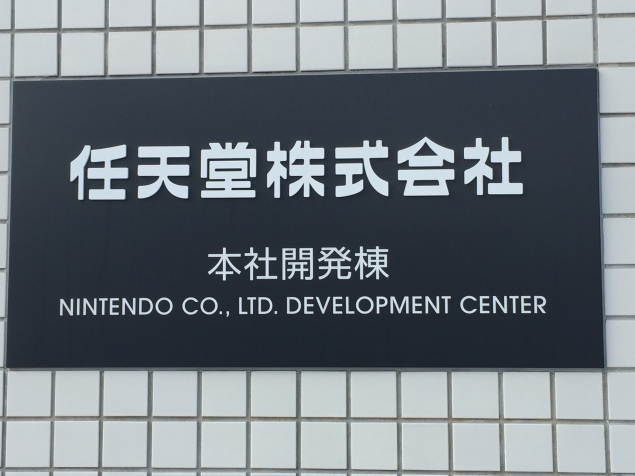 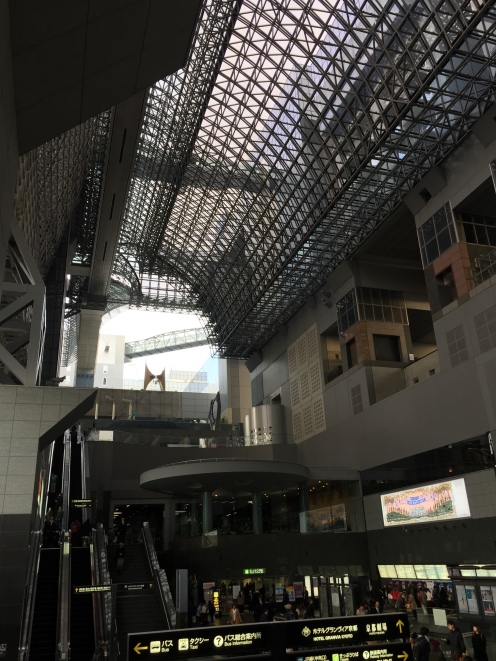 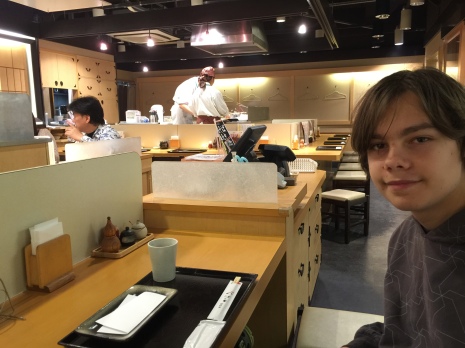 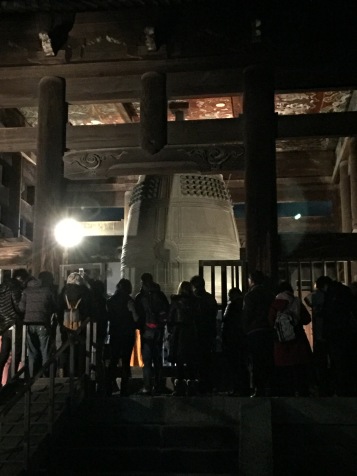 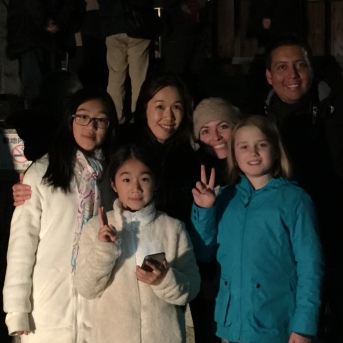