The first time I came to Japan, I stayed in Osaka for three or four days. I was not a huge fan. I found the trains much more difficult to navigate than those in Tokyo and just the general, overall vibe of the place a little less charming than many other places I have been to in Japan. The second time I came, we went to Universal Studios in Osaka for Christmas. We had so much fun that day, it was awesome. This trip, after having learned a great deal more about Japanese history than I had previously known, Osaka Castle was definitely on my list…

We set out on the train to Osaka yesterday, on a perfect, warm, breezy and sunny day. Our first glimpses of the castle were captivating….. Osaka Castle site had housed a temple until 1580, when Oda Nobunaga burned it down, in his bid to unify the country. Japan had three great unifiers, Oda Nobunaga, Toyotomi Hideyoshi and Tokugawa Ieyasu. This period of Japanese history is called the Sengoku Jidai (The Warring States) and it is my very, very favourite era. After Oda Nobunaga died, Toyotomi Hideyoshi, his successor, built Osaka Castle on the site of the burned down temple. It was built to be the permanent residence of the ruler of Japan.

The current building is a reconstruction of the original, and it houses a museum over 8 floors. It was a long walk, and a lot of stairs, to the top floor to begin the route. But…. it was sooooo worth it! I was in wonderment and amazement. Armour, swords and clothing that had been worn by Hideyoshi, and gifted by Nobunaga. Paintings and actual poems and scrolls written and signed and sealed by all of the famous daimyo (samurai lords) of the period. It was amazing. And…. a little overwhelming. The gardens are magnificent, the sakura in full bloom and the Castle was stunning. It was a very enjoyable excursion.

After spending most of the day at the Castle we headed to Dotonburi, a street along a canal with lots of restaurants and entertainment. A bustling hive of activity….. we had dinner, looked around a bit, did some Bic Camera shopping and decided, after nearly 20,000 steps for the day to head home. Everyone was exhausted! 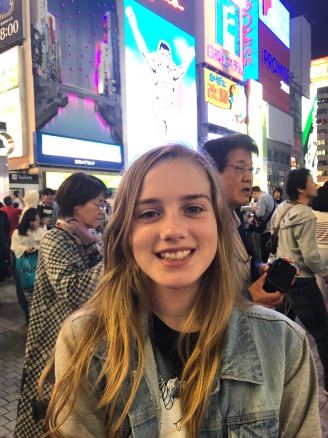 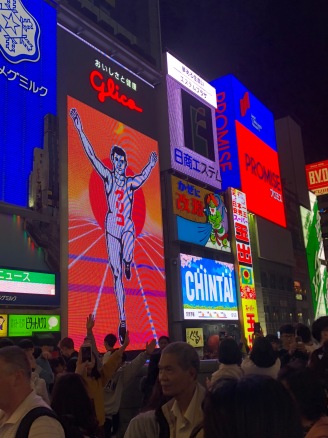