A quick little sake extra note… While on Miyajima on Monday we came across a pretty traditional little Japanese eatery. Super Sake Boy let out a small squeal of delight and informed me they had sake vending machines. I was a little confused because there are sake vending machines everywhere in Japan. You can buy small, prepackaged cups from anywhere. This was something completely different. We purchased our tickets from one vending machine, exchanged said tickets for tokens from the guy behind the counter, chose an ochoko- small drinking receptacle, then chose which three sake we wanted to try. All the sake was jizake (local sake) and Hiroshima is very famous for it’s sake. We then opened a little door in the sake vending machine, placed our ochoko on the tiny cup holder and pressed a button. The ochoko filled with sake, ready to be removed and enjoyed. It was a really fun experience and something different that we had not seen before. Here is a series of photos of Super Sake Boy using the machine. 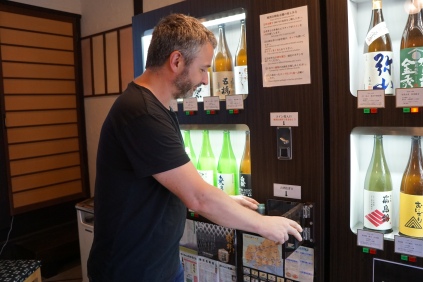 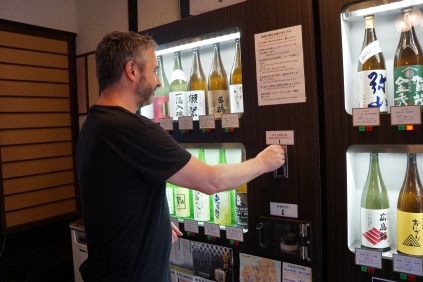